Drivers travel more than 15 million kilometres across our assets on an average day and their safety is paramount to us. It is our responsibility to minimise the risk of fatalities and crashes or injuries on our roads.

Some of the key ways in which we seek to manage and improve road safety include:

In FY16, we updated our Corporate Road Safety Strategy with the continued aim to reduce road safety risks on our roads. The actions within this strategy are informed by Transurban and government road safety data and with advice from the Australian Road Research Board.

Traffic control centres monitor road conditions and safety for each asset, while response teams provide rapid response in the event of a crash, traffic disruption or other incidents.

We benchmark our historical road safety performance using a Road Injury Crash Index (RICI), measuring the frequency of serious road injury crashes on our networks. This is considered a leading KPI as most road networks only measure fatalities.

In FY16, the RICI across all Transurban assets was 4.58 injury crashes per 100 million vehicle kilometres travelled. This is a decrease on the previous year of 5.52 but we did not quite reach our target of 4.29. We are targeting a reduction in our road injury crash index on an annual basis.

In total these figures represented 263 injury crashes on our roads in FY16 over the course of approximately 5.7 billion vehicle kilometres travelled.

We believe that as a community, we should be aiming for a zero road toll and that we all have the right to use our roads and streets without threat to lives or health. Unfortunately, four fatal road accidents occurred on our operating assets during FY16. This included two single-vehicle fatality crashes, and two separate incidents of persons struck while on the motorway.

We continue to focus on improving the safety of our motorways and increasing driver awareness on road safety.

In August 2015, Transurban participated in the Queensland State Government’s inaugural Queensland Road Safety Week to provide Queenslanders with the opportunity to be directly involved in making our roads safer for everyone. Each day of the week we focused on awareness raising and communication of a different road safety risk - distractions, speed, fatigue and restraints, sharing the road, and drink and drug driving.

In August 2015, we also attended the official launch of the Towards Zero campaign in Victoria, a Transport Accident Commission campaign to further reduce the road toll by focusing on safe roads, safe vehicles, safe people and safe speeds. Towards Zero banners were installed along CityLink to support the campaign.

Over the Christmas holiday period in Queensland, we launched a social media road safety campaign using the @govianetwork Twitter and Instagram account, posting a series of road safety messages using the hashtag #roadtriptips.

In May 2016, we supported Yellow Ribbon National Road Safety Week – an initiative of the Safer Australian Roads and Highways (SARAH) group – with a range of activities across all Australian markets including lighting the Sir Leo Hielscher Bridges in Brisbane and Bolte Bridge in Melbourne yellow, and providing roadside electronic messaging reminding motorists of the central theme of SARAH's campaign to ‘Drive So Others Survive’.

In FY16, we launched our Customer Assistance Program for customers who have been involved in or witnessed a traumatic incident on our roads. Our incident response teams are trained to detect signs of trauma and the different reactions people may have to an incident.

Incident response teams provide bottled water and an information pack to customers which includes access to up to three complimentary counselling sessions provided by our Employee Assistance Program partner. 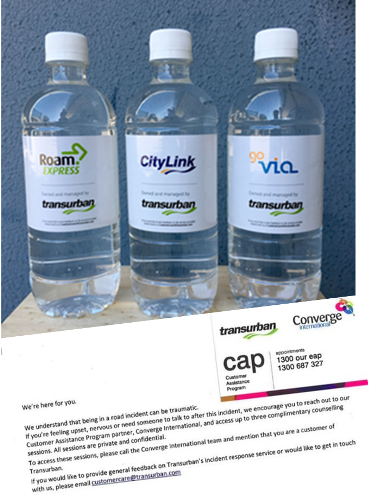 We also led a discussion on the issue at the Road Freight Industry Council and are engaging with road user groups, the NSW Police, the community and overseas motorway operators to determine global best practices to influence safe driver behaviour in work zones.

Improvements to barrier gates on the Express Lanes

The 95 Express Lanes in the USA are reversible with the direction changed to accommodate peak traffic. More than 24 barrier gates are used to direct traffic flow.

Transurban assumed operation of the gates from Virginia Department of Transportation (VDOT) in late December 2014, with the opening of the new 95 Express Lanes, and immediately identified an unacceptably high number of accidents caused by vehicles colliding with the gates. There was an average of two incidents a day or approximately 700 per year. These incidents were not only a safety issue but affected lane availability and were costly in terms of repair and replacement.

A project to enhance the visibility of gates led to the installation of reflective flags attached to the gate arms. Implementation required negotiation with VDOT and Federal Highway Administration around acceptable gate design and safety precautions. The new flags were installed in June 2015 and have since dramatically improved the visibility of gates, leading to a significant reduction in gate collisions.